November 13, 2012 – Scodix, the leading provider of digital enhancement solutions for the graphic arts industry, today announced the company’s initial results from their Graph Expo exhibition in Chicago last month. The company reports the show generated record booth leads, and samples distributed, and overall estimated booth traffic was the highest ever recorded at North American event by the firm. In addition, Scodix reported that both S Series systems, exhibited on the show floor, were sold and shipped directly to customers post-show. For more information, go to www.scodix.com.

“At Graph Expo an estimated 10,000 people visited the Scodix booth. We know because over 50,000 samples were handed out,” notes Dror Danai, Vice President, Sales and Business Development, Scodix. “And though we’ll never be able to accurately calculate how many were exposed to Scodix SENSE for the first time, the buzz and excitement of crowds in the booth was constant throughout the show. From Frank Romano’s endorsements after drupa to Tom Zotos’ autograph session, we were consistently being told we were the talk of the show.”

The Scodix Rainbow Station is the world’s first in-house digital inkjet glittering station producing the Scodix Digital Glittering experience. Scodix is now the only supplier to deliver this one-of-a-kind glitter solution, creating new opportunities and value for producers of photo-album covers and yearbooks, marketing communication materials, cosmetics and premium packaging, business cards, wedding invitations, shelf-stoppers and other short-run applications. With the modular design of the Scodix S Series systems, the Rainbow station can be added on as a new production station at any time. Graph Expo marked the first presentation of the Rainbow Station in the Americas.

One of the truly remarkable happenings at the show was how the crowds lined up to meet Tom Zotos, renowned Pop Artist/Publisher of Hollywood Studios, and the Music Industry. Mr. Zotos, who has come to love and endorse the Scodix printing enhancement process, was treated to lines of fans and autograph seekers that literally stretched around the booth. 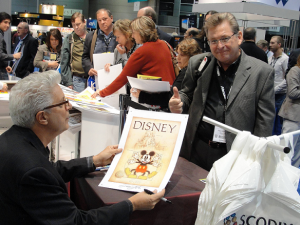 Although fully expecting a strong turnout, Scodix ran out of several lines of Disney and Hollywood Character themed posters before having to print out more before the final days of the show. To see more of Mr. Zotos’ work and hear him speak about Scodix, go to: Tom Zotos.

One of the latest Scodix innovations exhibited at Graph Expo was AROMA. The new scented print enhancement adds the sense of smell to capture the attention and influence consumers exposed Scodix-enhanced packaging and output. Industry pundit Frank Romano named Scodix one of the “two hottest things” at the show (Frank Romano). Though still in the development stages, and not expected to be released until late 2013, AROMA is just one more example of Scodix technology that is aiding digital service providers in their quest to differentiate themselves in demanding and crowed markets. 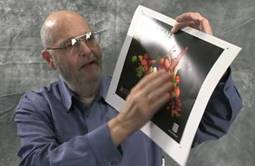 As a stand-alone solution compatible with offset, laminated sheets and digital print feeds, the press automatically processes a wide range of substrates and formats (substrates weights from 135 to 675 gsm / 6-30 points and thickness of up to 0.7mm / 700 microns). The Scodix S Series can print variable levels of thickness and texture, with a thick clear polymer that can reach as high as 250 microns, enabling the production of Braille letters, as well as graphic elements.

Scodix Ltd. is the leading provider of digital print enhancements for the graphic arts industry, offering the breakthrough Scodix SENSE™ experience and the Scodix Rainbow station in the Americas, Europe, Middle-East, Asia and Africa. The company’s aim is to lead print enhancement into the digital age and to be known for its passion and commitment to providing what our customers need the most – true brand differentiation for today’s highly competitive printing environment. For more information please visit www.scodix.com.

Copyright 2012. All brand names are the property of their respective owners and may or may not be trademarked.